Published by Deborah on 6 December 2021

The first tunnel boring machine (TBM) in the Midlands has now been launched, brought in to dig a one-mile tunnel under Long Itchington Wood in Warwickshire as part of Phase 1 of the HS2 project. The TBM is named ‘Dorothy’ after Dorothy Hodgkin, who in 1964 became the first British woman to win the Nobel Prize in Chemistry.

Around 170 engineers have been working on the 2,000 tonne, 125m long TBM during its construction and assembly. An expert tunnelling team will now work around the clock in shifts to operate the machine for around five months as it excavates the first bore of the one-mile tunnel.

This will be the first HS2 tunnel to be completed on the project, with the machine set to break through its first bore at the south portal in Spring 2022. It will then be disassembled and taken back to the north portal to dig the second bore, which is due to be completed in early 2023. 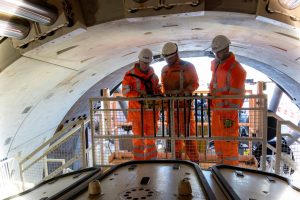 The tunnel, which will preserve the ancient woodland above, forms a key element in how HS2 is managing environmental impacts through the design of the railway, preserving Britain’s precious wildlife habitats. These woods are classified as a Site of Special Scientific Interest (SSSI) and have complex ecosystems that have taken hundreds of years to establish.