Published by Deborah on 9 December 2022

HS2 Ltd’s tunnel boring machine (TBM) has launched for its second one-mile tunnel bore under Long Itchington Wood in Warwickshire, marking the next big milestone for construction on the northern section of Phase One of the HS2 project. The 125 metre-long TBM, nicknamed ‘Dorothy’, is boring the tunnel that preserves the ancient woodland of Long Itchington Wood, which is classified as a Site of Special Scientific Interest (SSSI) with complex ecosystems that have taken hundreds of years to establish. 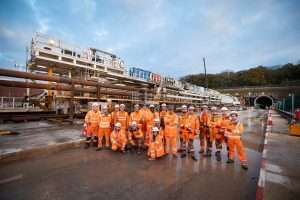 Excavation of the twin bore tunnel will produce around 500,000 tonnes of mudstone and soil, which is being processed at an on-site slurry treatment plant and separated out before being transported by a 254 metre conveyer to be used to build embankments along the route of the railway.

“This has been an intense four months for the 300-strong team, including an intricate logistical operation to safely transport the TBM’s giant cutterhead and tail skin back to the north portal. This is another fantastic milestone for BBV and a proud moment for our fantastic tunnelling team.”

The TBM is named ‘Dorothy’ after Dorothy Hodgkin, who in 1964 became the first British woman to win the Nobel Prize in Chemistry.