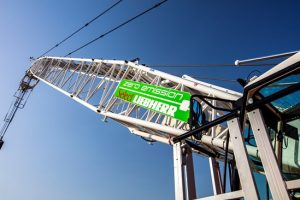 Align – a joint venture formed of Bouygues Travaux Publics, Sir Robert McAlpine, and VolkerFitzpatrick, have also announced that seven of their 14 sites are now diesel-free. These include five vent shaft sites along the route of the 10 mile Chiltern tunnels in Buckinghamshire, and two sites involved in the construction of the Colne Valley Viaduct.

After achieving the first diesel-free site on the HS2 project in May, SCS JV aim to be fully diesel-free by the end of 2023 using a combination of mains electricity, fully electric machines, renewable energy and biofuels.

Their first site – Canterbury Road Vent Shaft in South Kilburn, is connected to mains electricity on a 100% renewable energy tariff. This powers one of the UK’s first 160 tonne emissions-free fully electric crawler crane, as well as other electric plant such as electric compressors, with the rest of the machinery using sustainably sourced biofuels (HVO) as a direct replacement for diesel. 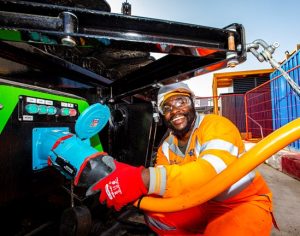 In addition, one of the tower cranes in the Euston Area has been fitted with the PUNCH Flybrid ‘flywheel’ energy recovery system, which stores and kinetic energy to use when needed to downscale peak energy demand and therefore cut energy consumption. This technology recently won the award for the Carbon Net Zero Initiative of the Year and the overall Initiative of the Year Awards at the British Construction Industry Awards. 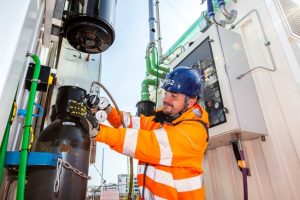 “We are proud to be pioneers of diesel-free construction, and we are committed to seeking out and adopting new technology and ways of working to eliminate diesel on construction sites. This all starts with a shift in mindset and a belief that our industry can have a cleaner, greener future.”

As well as seven of Align’s 14 sites becoming diesel-free, their 136 acres (80 football pitches) Chiltern Tunnels South Portal, HS2’s largest construction site, is also well on its way to becoming 100% diesel-free next year. On the site, over 120 pieces of plant including dumpers, tractors, excavators, pumps and crushers are all operating using sustainably sourced biofuels (HVO).

In addition, there’s a range of fully electric plant such as telehandlers and excavators, renewable energy sources such as solar, and site safety gates powered by hydrogen, all reducing carbon impacts and improving local air quality.

HS2 has a rapidly expanding supply chain that is supporting jobs, investment and economic growth at a pivotal time for the economy. 2,760 businesses have delivered work on the project so far, with 96% of contracts Read more…