Our Annual Conference at Birmingham’s Think Tank Science Museum focused on the theme of ‘Delivering Europe’s biggest infrastructure project’. The day  highlighted the importance of HS2 as a transformative project at both national and regional levels, one that is essential to achieving the Government’s goals of levelling up and achieving net zero. The conference was a resounding success, and following a difficult period during which in-person events were limited by the pandemic, HSRG was delighted to be able to convene its members and supporters in person once again, to both celebrate the progress that has been made in delivering the network, and focus on the important steps still to come. 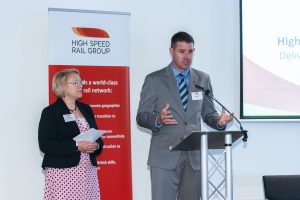 The event was well attended by rail insiders, political figures and a healthy number of HSRG apprentices; and  featured keynote speeches from Minister for HS2 Andrew Stephenson, Network Rail Chair Sir Peter Hendy, and Transport for the North Chair Lord Patrick McLoughlin, along with a variety of panel sessions. Despite the varied and wide ranging nature of the speakers, who between them offered a number of different perspectives on the HS2 project, they were united in putting forward a hopeful vision for rail and infrastructure, one which reflects the importance of high speed rail to the future of the UK economy and the central role it must play in our transport network for decades to come. 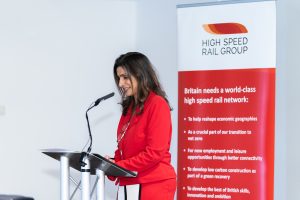 Hosted by ITV’s Sameena Ali-Khan, the event also included a panel session supported by HSRG member companies currently working on HS2 – including SCS JV, EKFB and AECOM – to consider a variety of themes relating to the delivery of HS2, including how innovative new uses of data and digital technology are benefitting major projects, for example through cutting carbon and helping increase construction site safety and security. 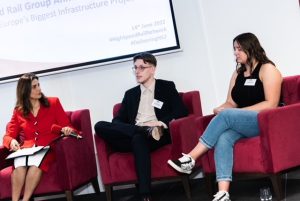 Apprentices from the High Speed Rail Group Apprentice Network delivered an excellent panel session, titled ‘Our Future in UK Infrastructure’, giving an engaging account of their respective roles and where they see themselves progressing within the industry.

Birmingham City Councils’ deputy Leader Brigid Jones gave a keynote speech which discussed not only the opportunities that HS2 will offer, and indeed are already bringing to the city, but also the challenges that go with it, most notably ensuring that the delivery of the project helps to tackle some of the economic and social disadvantages that are evident in parts of the city. 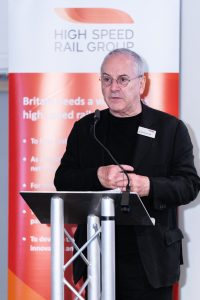 The conference concluded with a “fireside chat” with Maria Griffin, Hitachi-Alstom High-Speed JV Project Director, and Anthony Smith, CEO at Transport Focus; who considered the improved connectivity and capacity that HS2 will bring to the entire network, and how putting ‘empathy at the heart of the design’ will ensure that the needs of passengers of all ages and abilities are met.

Fittingly, HSRG’s Annual Conference was held alongside HS2’s impressive Curzon Street site, and site tours were held at regular intervals throughout the day, allowing attendees to witness first-hand exactly what the construction of Europe’s largest infrastructure project looks like, and get a sense of how the challenge of delivering a train service that fulfils the passenger demands of the future is being met. 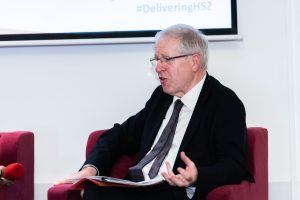 The day highlighted the transformational impact major projects like HS2 can have; and the significant benefits being felt now in places like the West Midlands – and that will be felt by the country for generations to come.

HS2: On track for skills and job creation

The latest in our ‘In Conversation With…’ virtual event series focused on the skills and jobs that will be created over the lifetime of the HS2 project.  Toby Perkins MP, Shadow Apprentices and Life-Long Learning Read more…

The High Speed Rail Group hosted an event to consider the growing demand and market for international high speed rail, and lessons that can be learnt and applied in the UK context. The event brought Read more…