Can transport investment deliver the levelling up agenda? 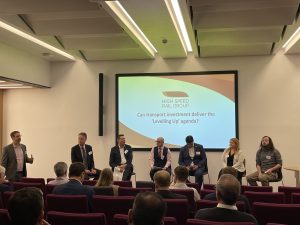 The panel considered transport in the context of placemaking, and how ensuring plans are in place to make the most of HS2 investment, particularly in and around stations, can be transformational for communities. The panel was united in a belief that, done right, regeneration projects that include good transport links can act as significant economic interventions, as well as helping to create happier and healthier places to live and work.

Devolution, it was argued, also has an essential role to play in ensuring that local stakeholders feel they have a interest in major projects. There was a discussion of the merits and dis-merits of the Green Book Appraisal system, and how to influence this to ensure that infrastructure investment in more deprived areas makes it through initial stages of analysis – where, despite the transformational impact transport investment may have, existing levels of poor productivity mean areas score poorly.

Our Annual Conference at Birmingham’s Think Tank Science Museum focused on the theme of ‘Delivering Europe’s biggest infrastructure project’. The day  highlighted the importance of HS2 as a transformative project at both national and regional Read more…

HS2: On track for skills and job creation

The latest in our ‘In Conversation With…’ virtual event series focused on the skills and jobs that will be created over the lifetime of the HS2 project.  Toby Perkins MP, Shadow Apprentices and Life-Long Learning Read more…