Midlands-based company Collins Earthworks has completed excavating the north portal site of Long Itchington Wood Tunnel, ready for the launch of the tunnel boring machine that will dig under the ancient woodland in Warwickshire.

The company, with headquarters in Ripley, Derbyshire, is contracted to our members, HS2’s main works contractor BBV Joint Venture (Balfour Beatty Group and VINCI Construction. Since April 2020, the team has excavated 300,000m3 of soil, with the topsoil and subsoils stored and separated with a layer of straw, so they can be put back in the same way after the tunnel has been built. At the busiest period there was a total of 35 machines on the site, all utilising the latest technology to lower emissions. The company’s construction fleet uses state-of-the-art fuel-efficient engines, with exhaust systems that efficiently break down nitrogen oxide gases into harmless elements before being expelled from the vehicle. 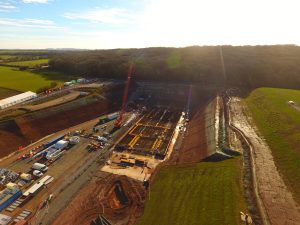 The Long Itchington Wood Tunnel site is one of the project’s largest, and Collins Earthworks have worked for nearly a year to carefully excavate material which will be reused to form environmental embankments and landscape for the railway. The tunnel in this location preserves the ancient woodland, so forms a key element in how we are managing environmental impacts through the design of the railway.

The yet-to-be named 2,000 tonne tunnel boring machine is currently arriving at the prepared site in pieces from the manufacturer Herrenknecht and will be reassembled ready to start digging the tunnel in the summer. It will take five months to dig the first bore of the tunnel, then it will be extracted at the south portal before being transported by road back to the north portal to commence the second bore.

At the peak of construction on the whole of Phase One of the project, ten tunnel boring machines – each a self-contained underground factory – will work 24 hours a day, seven days a week. Weighing up to 2,200 tonnes, each 160m long machine will bore and line the tunnels as they drive forward at speeds of up to 15 metres per day.

Winning the HS2 contract has meant that Collins Earthworks is able continue to focus on providing training for all staff to maintain high standards of health and safety practices, as well as increase the number of apprentice places on HS2 sites. The company has been included in the prestigious list from the London Stock Exchange of the 1,000 Companies to Inspire Britain, which celebrates some of the fastest-growing and most dynamic small and medium-sized enterprises (SMEs) in the UK and Europe.

Work has now begun to excavate the first of five shafts that will provide ventilation and emergency access to HS2’s ten-mile long tunnels under the Chiltern Hills. The structure was designed by HS2 Ltd’s main Read more…

HS2 and its industry partners have achieved certification by the Energy Saving Trust for the second stage of a retrofit innovation trial, meaning the green technology can now be rolled out to larger Non-Road Mobile Read more…