Published by Deborah on 9 November 2020

HS2 has unveiled the use of an innovative onboard robot that will improve safety and efficiency on the high speed rail project’s first two giant tunnelling machines, set to launch early next year.

Pioneered by HS2’s main works contractor, and HSRG member Align – the Krokodyl robot is the first of its kind anywhere in the world and will be installed in the two tunnel boring machines (TBMs) that will be used to bore the 10 mile (16km) long Chiltern tunnels. 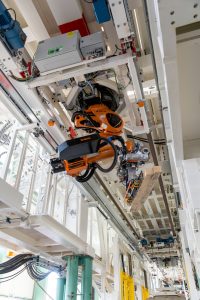 The Krokodyl robot, working in a similar manner to the robotic arms used in a car factory production line, will carry out  simple repetitive tasks – removing wooden spacers between tunnel segments and inserting connection dowels – that people would normally do.

Each of the segments weighs up to eight tonnes and are delivered to the TBM with wooden spacers between them which are generally removed by hand. By fully automating this process, the Krokodyl removes the need for people to work in this potentially hazardous area and helps with the installation of the 112,000 tunnel segments.

The tunnel segments are erected – as the TBM moves forward – in order to form a structural water tight ring designed to support the ground loads.

A second feature of the robot, known as the Dobydo, then places the dowels into position ready for the segment to be slotted into place. Again, by automating this process, the robot reduces risk to people and improve safety and efficiency.

The Align joint venture – a team made up of Bouygues Travaux Publics, Sir Robert McAlpine, and VolkerFitzpatrick – built on their experience of delivering major tunnelling project across the world to develop the Krokodyl.

“Safety is a key priority for HS2 and the introduction of these innovations that essentially remove personnel from harm’s way, is an excellent example of the sort of initiatives we are pleased to see implemented on the project. It is one of the ways that ‘safe at heart’ can be achieved by minimising exposure in high risk locations.”

“Safety is a key value that is shared by everyone working on HS2, including the client, Align itself and our supply chain partners. A lot of work has been undertaken by all concerned that has enabled us to develop and introduce this robot, thereby reducing the risk to our personnel, operating in our state of the art TBMs. We are very proud of these innovations which we would be happy to share with tunnelling teams working on other projects across the world, to help reduce the likelihood of accidents and injuries.”

Both 170m long machines are specifically designed for the mix of chalk and flint they will encounter under the Chilterns. Operating a pioneering ‘continuous boring’ technique, they are expected to take around 3 years to excavate the 9.1m metre diameter tunnels which will be lined with a concrete ring made of seven separate segments as they go.

The TBMs will convert the spoil into slurry which will be pumped back to the Align main site where it will be treated before being used for landscaping on-site, removing the need for additional HGVs on local roads.

HS2’s civils partner, Balfour Beatty VINCI (BBV), has opened the doors to its giant construction compound in Kingsbury, Warwickshire and revealed the scale of works underway ready to build one of the most complex sections Read more…

HS2’s designers have reduced the length of wall structures for the railway at Streethay from 1.6 kilometres to 420 metres, meaning 80% less concrete will be needed, supporting HS2’s ambition to cut carbon on the Read more…

HS2 Ltd has been granted planning permission by Birmingham City Council for two viaducts which will take the new high-speed railway into Curzon Street Station in the city centre. Curzon Viaduct No.3 and Lawley Middleway Read more…