Following the leaking of the Oakervee Review into HS2 to the Financial Times newspaper, we welcome its conclusions and published a letter to the Prime Minister urging him to “get HS2 done” and make an immediate decision to proceed with the project in line with the findings of the government-commissioned review.

HS2 is essential for both joining-up Britain and a pre-requisite for a net zero future. It is also employing some 10,000 people today, and the job losses from cancelling a project so far progressed would be devastating. Moreover, it is the only ‘shovel-ready’ project of its scale in Britain today; and the alternatives spoken of – laudable as many of them are – are some 5-10 years behind HS2 in the planning. The Government has stated they want an infrastructure revolution in this country – cancelling HS2 would delay that revolution by another decade.

Commenting on both the letter to the Prime Minister and the leaked Oakervee Review, a spokesman for HSRG said:

“The Government commissioned this review, they now need to implement its findings without any more delay. The review was supposed to take six weeks and has already lasted six months, with each month costing millions. The message from both Doug Oakervee and from the 41 companies that signed our letter is clear – end the dither, and get HS2 done.” 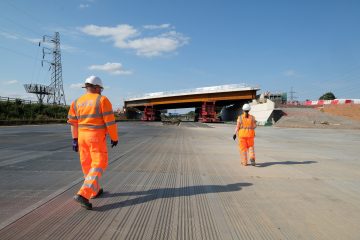