HS2 has revealed revised designs of the railway in the Canley Brook area near Kenilworth in Warwickshire which will significantly reduce environmental impacts and avoid a major realignment of a local river, preserving the home of protected wildlife such as otters and bats.

The design changes, developed by HSRG members and main works contractor Balfour Beatty Vinci (BBV) with their Design JV partners, mean that the railway will travel in a slightly shallower and longer cutting in this area. This means that a viaduct can be built over Canley Brook, so it will only need a small 80 metre diversion rather than the 700 metres in the original design. 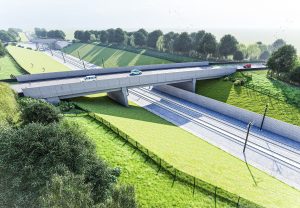 As a result, this will lead to significantly reduced environmental impacts, including around 600,000 cubic metres less material needing to be excavated and 28,000 cubic metres less concrete needed as a result of removing the retaining wall for the Canley Brook realignment. Less excavation and building work will also cut the amount of construction traffic on local roads, removing over 2,500 lorry movements, reducing noise and disruption for the local community.

Replacement of two kilometres of retaining walls with cutting slopes will also reduce the ‘barrier effect’ of the scheme for species and provide additional opportunities for new habitats and grassland for newts and reptiles. There are also plans for improved integrated landscape design.

More vegetation will be preserved and the overall amount of land required will be reduced, meaning more land can be returned to agricultural use after construction. There are also plans to create a high-quality wetland habitat either side of the realigned section of Canley Brook, as well as additional woodland, hedgerow and species-rich grassland habitat on both sides of Crackley Road Cutting. This will benefit a range of protected and local species and contribute to HS2’s objective of achieving no net loss of biodiversity.

Additional landscape bunds (raised earthwork structures) and noise barriers will be incorporated along the route for increased visual screening, better integration and to mitigate noise impacts.

Submission to consultation on Transport for the North’s Decarbonisation Strategy

This is a submission from the HSRG to the consultation on Transport for the North’s (TfN) Decarbonisation Strategy. The submission highlights the role of high speed rail and HS2 in decarbonising the transport system including Read more…

An open letter to the  Prime Minister, regarding the importance of HS2’s Eastern leg, from HSRG and the Railway Industry Association: Dear Prime Minister Last year you rightly committed your government to deliver HS2 in Read more…

A new railhead near the village of Calvert has been opened which will help HS2 continue to deliver construction material by rail to its biggest Buckinghamshire site without putting extra lorries on local roads. The Read more…